Where the Adventure Begins

The area now known as Fire Mountain Scout Reservation was settled and farmed by William Gaches from La Connor in the early 1900's. He built the farmhouse and farmed 300 acres, planting the orchard as well as hay in the field which is now Lake Challenge.

In the early 1950's the land was sold to Lloyd Nelson who raised beef cattle on the property. In 1971, the 300 acres owned by the Nelson's, as well as an additional 140 acres of the neighboring Walking M Ranch, were acquired by the Evergreen Area Council. The 440 acres were named Fire Mountain Scout Reservation by Council Scouter Bob Overstreet who, as a young man, had fought one of several fires on Cultus Mountain. 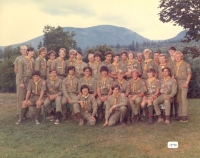 Hundreds of volunteers as well as the Army Reserve, Navy Seabees, and Marine Reserves worked frantically to turn the hay fields into the beautiful 37 acre Lake Challenge, build the Dining hall, Campfire Bowl and campsites so Fire Mountain would become a reality for hundreds of Snohomish County Scouts.

Over the years generous donors have financed 3 additions to the Dining Hall, the building of Salishan Lodge, and many other projects. In 1988 the Council Executive Board made a commitment to undertake a capital campaign to make Fire Mountain into a premier camping and training facility.

1988 saw the completion of a new commissary and separate meeting room addition to the Dining Hall, construction of a new bunkhouse with a lounge for the summer camp staff, the completion of two new troop campsites and, finally, the acquisition of 225 additional acres, bringing the total reservation to 665 acres.

Starting in 1990 the expansion continued with new plumbing and toilet facilities in each campsite and the opening of Cub Adventure Land to host resident camping programs for Cubs and Webelos Scouts. It featured a teepee campsite, a complete BB gun/Archery range complex, aquatics area and, its focal point, the Wild West style Fort Boeing.

In the early 2000's there was an additional push to improve the facilities and to enhance the program offerings available at the camp. This included the building of the 40-foot climbing wall in 2001 and the conversion of the campsites from canvas tents to stents and adirondacks from 2002 - 2009. 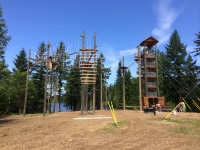 Starting in 2011 there was the 'Great Campsite Facelift' which included relocating campsites closer to the lake, building better campfire pits and patrol areas. 2014 had the completion of the 1080-foot zipline over Lake Challenge to Bjorn's Island and the new high and low COPE courses. And 2015 brought completion of the new boat beach marina on the south end of the lake.

Fire Mountain has continued to grow over the years in to a premier Scout camping facility supporting Boy Scouts, Cub Scouts and many youth and adult leader development programs throughout the year. 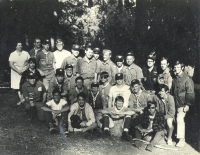 As a member of Troop 6, sponsored by the 1st Congregational Church, I went for the first time in 1949. The troop had a monthly campout and more often than not, it was held at Camp Sevenich. I went to summer camp in 1950, 1951 and 1952. I remember those as really good times. At summer camp in 1950, we had an outbreak of flu. At least half of the kids got sick. Carl Gipson, a former member of the City Council was the cook. Poor Carl was trying to figure out if something had gone wrong with the food preparation. Carl was real popular with the kids and he felt badly about it, even though it was not his fault. All in all, that was a great summer.

The situation at Camp Sevenich had grown to the point where we were getting a lot of vandalism and the neighborhood was closing in around the camp.

It got to the point where we almost hat to keep a guard on the place by 24 hours and 12 months a year. We had motorcycles running through and hot rods racing around creating a lot of problems. It became quite obvious that Sevenich was too close to town. We would have to move farther out and isolated so we could maintain a camp. The council started negotiations for a new location. The first location was one up by Sultan. It did not work out. Then the chance to make a trade for the property at Mt. Cultus presented itself.

In 1922, through the efforts of S.E. Bargreen, the Council acquired a lease on 4 acres of Forest Service land at Lake Kelcema. Over the years a lodge, several adirondacks were built and a swim beach developed. In 1944 longtime Scout Executive Capt. R.G. Mathews retired. In his honor the camp was renamed Camp Mathews. In the mid forties the Council's Order of the Arrow Lodge was born.

The summer camp at Lake Kelcema opened on July 27 with a ten day period of 70 scouts, a seven day period, August 6 to 13, with 44 cubs and a Den Chief Staff of 9. The view, previously help that Camp Kelcema with its beautiful surroundings, safe bathing facilities, comfortable lodge and adequate sleeping accommodations made a desirable summer camp location for both Scouts and Cubs, was confirmed by the success of the first season.

With the completion of the Loop highway as far as Silverton, the problem of taking in supplies had been solved, however, for the last four miles, supplies were still brought in on pack mules. For the first time in the sixteen or so year history of Camp Kelcema, we had fresh milk.

Camp 22 located at Lake 22 just southeast of Verlot was owned by the YMCA. This camp was used by the Scouts of Snohomish County after Camp Tyree. Sleeping in big tents on Army cots, Scouts spent two weeks hiking the trails of the area and putting their Scouting skills to use. Formal Scouting use of Camp 22 ended with the formation of a new camp on leased Forest Service property at Lake Kelcema.

We went up to Tyree on the Monte Cristo Lone. Which was on the Buchanan Farm. We had a very nice camp there; good swimming, a nice cookhouse and a good sized tent. Mr. Kelly lined it up and put Mr. I.P. Hewett in charge. Mr. Kelly was there part of the time because he was our Executive. Later I.P. became out Executive. There was a big tent for medical and a tent for each patrol. We built our frames and bunks. It worked out real well.

Every morning we'd have reveille, do a little exercise, have a talk and then have breakfast. We'd do whatever they had lined up for us, hiking or scouting skills but mainly swimming. Seems to me there were about 80 boys in camp. One of the highlights was the bus, which came every day on the railroad tracks bringing mail and supplies.

Camp Tyree the fire camp, was used for three or four years.